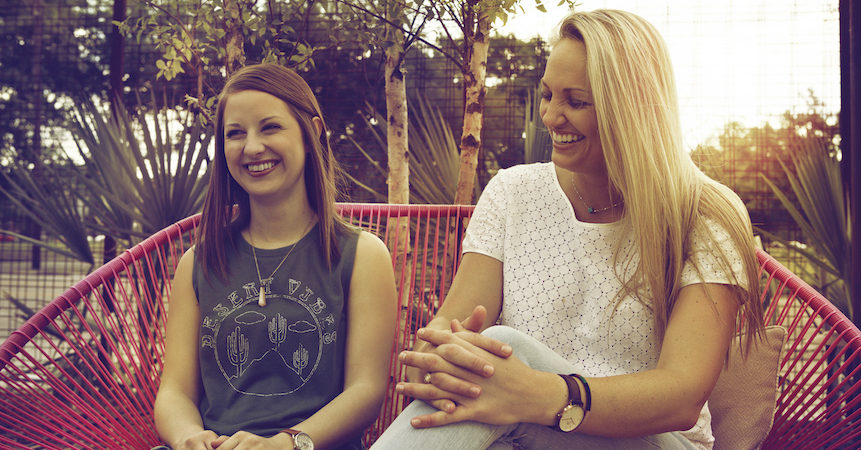 After becoming friends while attending school at the University of Texas at Austin, Megan Smith and Kelsey Gledhill both worked at an LGBTQ magazine in Houston. Through this work, they became intimately familiar with the needs and wants of the local queer community. But while they were out and about, they also received a lot of honest feedback, which revealed that many members of the LGBTQ community didn’t feel represented by the city’s current LGBTQ media outlets.

Smith and Gledhill, who both have degrees and professional experience in writing and communications, saw an opportunity to create something that did recognize and represent everyone—especially the younger LGBTQ community, trans folks, and queer people of color. In June 2017, they launched Spectrum South, an online magazine, to showcase all voices of the queer South.

Smith, 27, recently finished a graduate degree in mass communication studies from the University of Houston and, by day, works as a publications editor at the Museum of Fine Arts, Houston. Gledhill, 30, has a master’s in advertising from the University of Texas at Austin, currently runs an online health and beauty subscription service, and manages operations for her family company, Gledhill Construction.

Together, the two run Spectrum South in their spare time as a labor of love, working with a team of freelance writers to cover topics relevant to the LGBTQ+ community across the southern United States. Smith is the publication’s editor-in-chief, while Gledhill serves as the magazine’s chief creative officer.

This is Smith and Gledhill’s story of coming into their queer identities, discovering representation issues within the Houston LGBTQ community, and launching a publication to elevate queer southern voices.

Profiles in Pride: What did each of your journeys to coming out as queer look like?

Kelsey Gledhill: My journey could have been better, but it could have been worse. I grew up in a fairly small town just an hour north of Houston that was and is still dripping in tradition and conservatism. High school, marriage, a 9-to-5 job, and church on Sunday is par for the course.

As you can imagine, it was not the most welcoming place to explore my identity, so naturally, I pushed my sexuality to the deepest part of the closet until college. I went to Texas A&M for my bachelor’s degree, and although a pretty conservative school, I still felt more free to express myself there than at home, and eventually came out to my closest circle of people at age 20.

I began warming up to my sexuality and identity at 23 when I made the move to Austin to pursue a master’s degree in copywriting. There, I discovered and explored my creative drive and met several unbelievably talented individuals that I’m lucky to still call friends, one being Megan. From Austin, I moved to Los Angeles where I worked alongside other inspiring talents and learned even more about myself as a multi-faceted creative.

However, it wasn’t until I moved to Houston that I fully embraced my identity and have lived a pretty out life here. I never thought that of all places Houston would be the place to do that, but it’s been the most welcoming city. We’re definitely in the South here in Houston, but it’s been a great city for me, not only career-wise, but personally.

Megan Smith: I feel like my story has a lot of similarities to Kelsey’s, but a lot of differences too. I grew up in Houston. Like Kelsey, I felt like I was different from a young age. I have always viewed the world with a different lens than others, but I didn’t really know why at the time. In high school, I started dating my first girlfriend. I just kind of fell into it; I didn’t really think about being gay until it was happening. We were so young, it was more like we were finding ourselves through each other.

But I very much felt like we were the only lesbians in the world, because nobody else was really out in high school at that time. My mom did not take it very well, and to this day we don’t really talk about it, but my dad has been a huge advocate and supporter. I think Kelsey and I both ride this weird line of running Spectrum South and being very publicly out, but not really being able to share that with our families.

After my high school girlfriend and I broke up, I went through the heartbreak of ‘OK, I’ve dated the one lesbian in the world; what am I going to do?’ But once I started school at UT, I was able to find my chosen queer family, and learned the true power of community.

I’d only ever experienced Houston like a high schooler would have, going to the movies and the mall, so when I moved back after college, I was not connected to the city’s queer community at all. Moving back and actually becoming immersed in this community, and getting connected to the city’s amazing queer people — that’s really what inspired us to do this work.

PIP: Right now, is Spectrum South currently a side project for you two?

KG: Yes, that’s correct. It definitely requires a lot of our time and feels like a full-time job, but unfortunately we do not bring home a full-time salary. Spectrum South is on the path to creating a viable and profitable business, but where we are today, it’s a labor of love. This work is an integral part of our identities and our self-fulfillment. If it was about making money, we wouldn’t be doing it.

PIP: Absolutely! Can you discuss why you started Spectrum South?

MS: When Kelsey and I moved back to Houston separately, she went to work for an advertising agency and I went to work for a local LGBTQ magazine as an assistant editor, so I got my feet wet in LGBTQ media. Kelsey ended up coming on later and doing some creative and business work for the magazine as well.

As part of that work, we were in charge of a lot of community outreach. It was exciting for us, because we like interacting with people! But that also meant we were very outward-facing, and the ones receiving a lot of honest feedback from the community — mostly from people who weren’t feeling connected or relating to the content that was being produced. That feedback predominantly came from younger people, queer people of color, and trans folks. From there, Kelsey and I started having conversations about how to better represent these community members.

We’d always go to lunch and talk about hypotheticals, like what if we really did this? We started looking at the business side of things. Okay, it would have to be online, because we don’t have the money to put behind a print publication right now, even though we both still like print. What is the overhead going to be? I have some very basic web design skills, so I can build the site. Who do we know that can write and do photography?

KG: I have a background in copywriting and design, so with our forces combined, we realized, oh my gosh, we could probably do this! Simply put, Houston needed a platform for queer voices that were not just cis, gay, white men. The city has a great LGBTQ community — you see it at Pride — but where is everyone throughout the entire year? That’s part of our goal, to not only create a platform, but to host community events that welcome all on the LGBTQ spectrum so that we can meet one other face to face.

PIP: Why is it so important to you two to share queer southern voices specifically?

KG: The South is a very unique place — it can be just as bitter and harsh as it can be warm and welcoming. Many think queer people leave the South as soon as they can, but we know better. We are here, thriving in business, the arts, philanthropy, community organizing, and so much more. With Spectrum South, we aspire to be unapologetically inclusive and celebrate both our southern and queer identities.

MS: Not all queer southern stories are the exact same. Living in Atlanta looks very different than living in rural Mississippi. That’s something that’s important to us too, sharing that geographic diversity.

PIP: What are your future plans for Spectrum South?

KG: We’re excited to announce that we recently acquired a local podcast called Veer Queer that centers trans voices and queer people of color here and across the South. Expanding beyond the written form has always been a goal, so when the opportunity came along for the podcast, we jumped at it. We’ll be hosting an event to kick off Season 4 of Veer Queer on Thursday, January 24, 2019 from 7–9PM at Sharespace Preston. The night will include a pre-show reception, live episode recording with special guest Jessica Zyrie, followed by a post-show reception and Q&A.

MS: Kelsey and I didn’t really know how this endeavor was going to play out when we first started it, but it’s been an eye-opening and amazing journey thus far. It’s really the individual stories that have continued to encourage us to do this work. For example, we had the mom of a trans child come up to us and say, “Oh my gosh, this is so cool, I’m going to pass this resource onto my daughter.” Things like that — those are the little stories and victories that keep us going and doing the work. Those are the people we do this for.

Sarah Shalene Guilbeaux: On Discovering Her Queerness and Exploring Gender Identity
Matthew Teter: On the Life-Saving Importance of Trans Visibility
Lee Dewey: On Fighting to Be Visible as a Gender Non-Conforming Person
Jamie Thrower: On Being a Photographer for the Queer Community
Spread the love