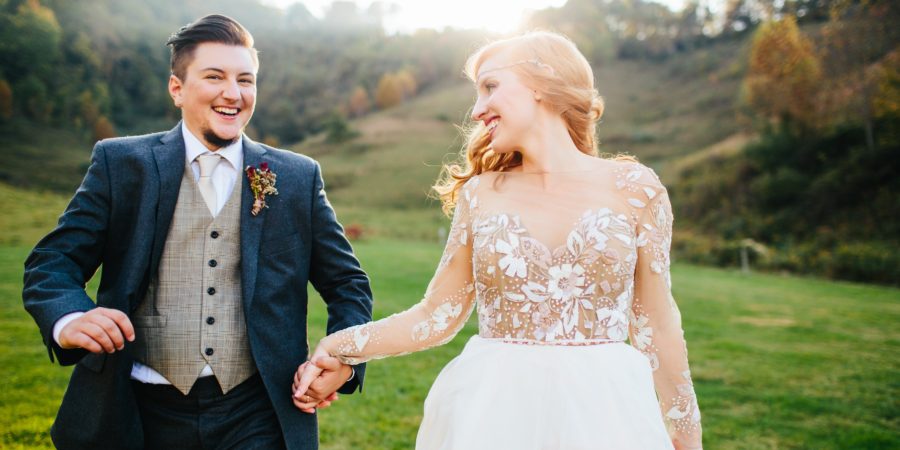 When an individual transitions from one gender to another, they grapple with a new gender identity, and typically, a new label for their sexual orientation. But if that person has a partner, the transition often significantly affects the partner’s identity, too — a concept that isn’t often discussed.

Today’s profile is with 28-year-old Hannah Haley, a professional makeup artist in Austin, Texas (check out her amazing work!), who has been with her husband, Peter Haley, since nearly the beginning of his transition from female to male.

Hannah says she came out in middle school and referred to herself as queer and lesbian interchangeably, dating only cisgender women. Having a boyfriend — let alone a husband — was not in the cards.

One night in her early twenties, Hannah saw someone she thought was a woman and felt a spark of attraction. Hannah was surprised, to say the least, when this person was introduced as Peter.

Peter, now a 28-year-old attending school for computer programming, was transgender, and he was just beginning his transition during that fateful time when Hannah met him. Only a few people had started to call him by his chosen name — his family was still using his name given at birth (his “dead name”), Hannah says — and he hadn’t yet started hormone therapy. Peter was hoping to transition and start hormones when he wasn’t in a relationship, so meeting Hannah threw a slight wrench in his plans, she says.

Learning Peter was trans “didn’t really make me lose interest,” Hannah recalls, “but I also didn’t think it was going anywhere, either. I thought it would just be some hookup.” She was wrong: seven years later they’re still together, and they married just over a year ago.

Read on for our interview to learn how Peter’s transition has affected Hannah’s identity, plus the joys and challenges of being the partner of a transitioning person.

Profiles in Pride: Were you afraid a long-term relationship with Peter wouldn’t be possible or that you would lose attraction to him since you were usually only interested in cis-women?

Hannah Haley: Yes, when we decided to get in a relationship, I was really scared I wouldn’t be attracted to him anymore once he started hormones. There were a lot of fears, and I’d read all these articles about when you fuck with your hormones, like even when women go on birth control, you can accidentally fall out of love with your partner, because a lot of attraction is based on smell and scent. 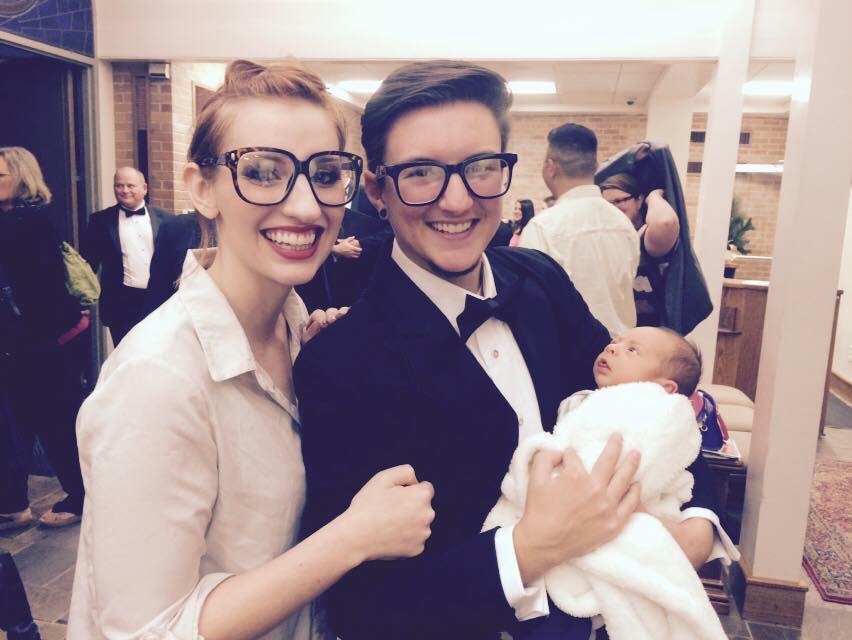 PIP: Were you surprised that you continued to stay attracted as he transitioned?

HH: I was surprised. I actually smelled him one day, and his BO smelled good. I said, “OK, this is fine. I’m willing to go down this road with you. I can’t make any promises; we’ll see what happens.” And it worked out!

PIP: You married Peter last year — was it difficult to make this lifelong decision when there were still some unknowns about how his transition would unfold?

HH: We’d been together for like seven years at that point, so it didn’t feel that unknown to me anymore. He’s been on and off hormones for a while, so I had enough stability to know. I wouldn’t say it felt unknown. I had all the normal, scary feelings about getting married, but I don’t think any of it related to the transition, other than how having a husband would make me look super straight!

PIP: Does it bother you that people on the street may think you’re a heteronormative couple?

HH: It’s hard sometimes. I’m lucky that people in Austin for the most part, my community, obviously knows I’m queer; I’m well established in that. But it’s not easy to navigate, especially when I meet new people. Or, we’ve been considering moving lately, and the thought of moving to a new place terrifies me, because people meet me and assume that we’re straight — we look fairly normal. But I don’t function well with straight people. I have to have a queer community around me, at least predominantly queer, because there’s an understanding and a connection. I came out when I was like in eighth grade, around age 13. I’ve been in communities before that rejected me because of how femme I was, and that’s even when I had a girlfriend.

PIP: I can see how it’s important for for you to still be recognized as queer! I noticed on your Instagram that you sometimes use tags like “queercouple” on pics of you and Peter to indicate that.

HH: I do that on purpose. I remember the time that somebody called me a power femme, and for the first time ever someone used the word that described me. So I try really hard to use the word femme a lot, because I feel like it describes who I am and it includes my queerness in that. But it is different when I’m talking to people; I don’t also want to out Peter. He’s pretty comfortable and open, but I’m not just gonna go around volunteering he’s trans to strangers just so they know I’m queer. It’s hard to navigate. 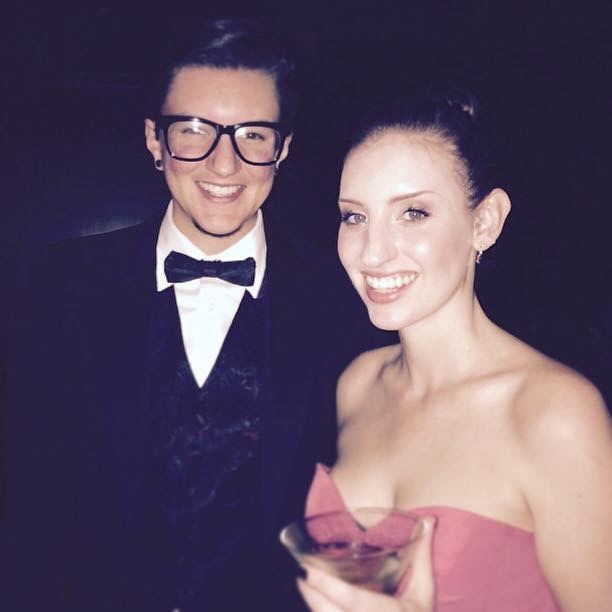 PIP: That makes sense! What have been some of the other challenges of being the partner of a trans person?

HH: I would just say the obvious: we have to work really hard on being visible and using our privilege. In one way it’s hard because our own community doesn’t see us sometimes, but in another way, we have the privilege of fitting into straight society, and we’re super aware of that and try to use it for the good.

We’re pretty out, and we try to use our privilege to correct people when they say something really fucked up. We use it to be even louder.

PIP: Did you face any other challenges as the partner of a transitioning person, like when Peter got on hormones?

HH: Yes, hormones were hard. The first year of transition was a really big adjustment period, and also just not always having them, not always being financially stable. We haven’t always been able to have him constantly on hormones, which is really hard, so for a while his hormones were up and down, which I think is a common experience for trans people. So that’s been hard. I would say like a year or two when he was going on hormones, that was difficult. Top surgery was a little hard; I was working a lot and taking care of him. So that was just a struggle.

PIP: Was Peter getting top surgery emotional for you?

HH: It was, I definitely had sadness. I had both happiness and sadness. I was very, very happy for him, but it also brought up some sadness for me. That’s an emotional bond I had with his boobs; that relationship wasn’t going to be anymore.

It also makes me sad that we live in a society where you can’t have boobs and also be a man. He’s told me he wouldn’t have gotten top surgery if we lived in a different society that didn’t see a topless pair of boobs as being womanly.

PIP: Now that we’ve discussed the hard stuff, can you discuss the joys and rewards of being the partner of a transgender person?

Trans people have such a unique experience in life, where they have lived as two genders, and maybe more. I think it’s a really beautiful experience that I honestly wish the whole world could feel and experience.

He knows what it’s like to have been a woman, and all of the fucked up ways society treats women and how hard it can be. And how difficult that is to navigate. So that’s amazing — I have this partner who can understand and is a badass feminist and just gets that on a level that cis men just can’t; I think that’s really beautiful. And the fact that he’s beautifully masculine as well. I think it’s a magical thing that they have this unique experience, and he can relate to me on several different levels and balance me out.

Editor’s note: Hannah and Peter were recently featured in a documentary called TransYouth, which has been making the circuits at the film festivals. Check out the film’s website to see a trailer and learn more!

Dean O’Reilly: On Landing His First Job Because of His Passion for RuPaul’s Drag Race
Jamie Zapata: On Her Life-Changing HIV Diagnosis and Becoming an LGBTQ Real Estate Advocate
Samantha Allen: On Exploring LGBTQ Culture in America’s Red States
Jamie Thrower: On Being a Photographer for the Queer Community
Spread the love