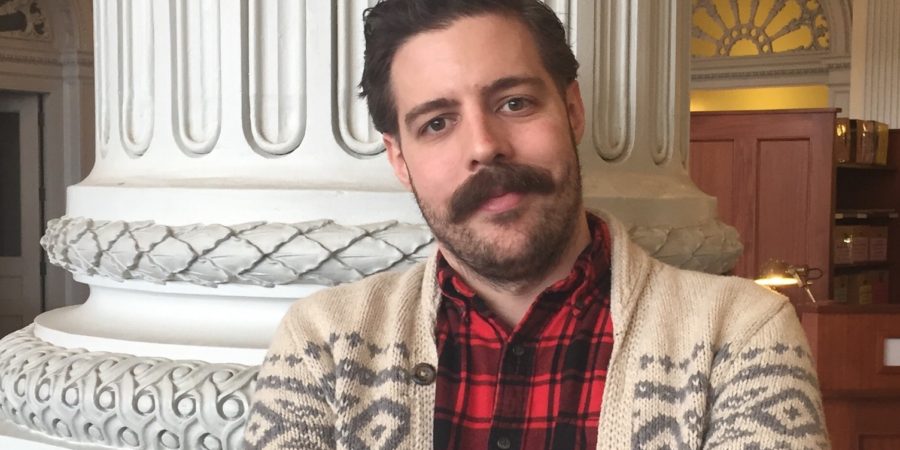 David Clerkin is passionate about books — so much so that he’s currently obtaining his masters in library and information science. The 32-year-old is originally from Madison, Wisconsin, but he eventually left and moved around to several different cities and states. After returning to Madison a few years ago, he decided he wanted to give back somehow.

When searching for a volunteer opportunity that entailed providing books to people in prison, the first thing he found was the LGBT Books to Prisoners program, which is based in Madison. This organization collects and sends free books to LGBTQ+ people in prison nationwide.

Though Clerkin is not in the LGBTQ community himself, after learning about the challenges these individuals face on top of the regular difficulties of incarceration, he became passionate about the cause as an ally.

Clerkin started as a volunteer, and he now serves as an organizer to help oversee efforts to mail books to LGBTQ+ people in prisons all across the country. In the past decade, the organization has sent books to nearly 8,000 people in prison, helping give them back some power, educate and entertain themselves, and enjoy some dignity in an oppressive situation.

Here’s Clerkin’s take on why the LGBT Books to Prisoners program is so important, why he got involved, and how you can, too.

Profiles in Pride: When and why was the LGBT Books to Prisoners organization founded?

David Clerkin: Our project has its origin in another project, Wisconsin Book to Prisoners, which deals exclusively with people who are in prison in Wisconsin. A member of theirs, Dennis Bergren, had noticed a lot of people asking for LGBT materials that they didn’t have a lot of at the time. So he started to get a lot of those, and that eventually spun off into our organization, and that was about 10 years ago.

He was originally running the project out of his house and doing it on his own time; he was retired and had the time and energy for that. But eventually it became too much for him, and he handed the project off to Melissa and Irene, our first organizers. Several more people were then invited in over the years, so since then we’ve been run by an organizing collective with varying numbers of people.

After Dennis’s house, we moved to a local bookstore’s basement; they had some extra space and the project was run out of there for a number of years. Last year we moved to a new location in the basement of the Social Justice Center here in town. The bookstore closed, which was a sad reason to have to leave, but moving into the new space has been good for us! We have a little more room, lots of shelves and stuff.

PIP: How is this project beneficial to LGBTQ prisoners?

DC: For LGBT people who are in prison, a lot of times there’s just not a lot of information or resources. Prison libraries can be woefully inadequate, and a lot of LGBTQ people are in solitary. They say it’s for their protection, but they’re basically isolated from everyone else. Our project can be a way to get information to them, to help them with whatever they want to learn about. Gender identity, what it means to come out, how to do that, all sorts of things like that.

Beyond just LGBT issues specifically, we think everyone has a right to knowledge and should be able to grow or enjoy whatever in their own way. We try and facilitate that and give a little dignity and power back to people in a pretty shitty situation.

PIP: What are some of the other challenges LGBTQ prisoners face?

DC: Beyond being isolated, I think there’s a lot of specific abuse directed at them from other people who are being kept there. But also from guards, from staff.

I think a lot of people feel unsafe or unable to express themselves or don’t feel they’re part of a community there. So I think this is a good lifeline for them.

PIP: How do prisoners get connected with the program — do they request books directly from the organization?

DC: Yes, they request through us. I believe there’s a lot of newsletters and different resource guides that go out to people in prison, and I know we’re listed on there.

So people write to us directly and either ask for specific types of materials or ask what we can provide. We’ll send them a list of roughly the topics we have available, and then they can request, “I want books on this and this.” We try to fill that as best as we can depending what we have on our shelves at the moment.

PIP: I saw on your wish list you have requests for everything from gay fiction and erotica to educational materials. What are some other popular requests?

DC: In terms of things we get requests for a lot, obviously LGBTQ material, but then we get a lot of requests for wiccan and spiritual books. Thrillers and mysteries, just fun stuff to read. And drawing books, games, things to just kind of help pass the time.

We also get requests for legal stuff. People ask about GED topics, trade materials, how to start a business, how to run their own business. There definitely seems to be a great need for more knowledge, especially about specific skills inside prisons.

PIP: What compelled you to get involved with this project as an ally?

DC: I’ve been involved in political stuff since I was in high school, but a few years ago I felt like I hadn’t been doing much for a while. Prison justice issues have always been important to me, so I actually just looked up “Madison, Wisconsin books to prisoners projects.” I kind of had an idea that here was something like that going on, but I wasn’t sure exactly what.

LGBT Books to Prisoners popped up, so I started going to sessions and helping wrap books and put packages together, and was eventually asked to join the organizing collective.

PIP: Does the organization ever get letters back from inmates who receive books?

DC: Yes, definitely, we get a lot of people who write back pretty frequently. Some will say, “Thanks, it means so much to me.” Or we’ll get pictures or artwork they’ve done. If they have a holiday card, they’ll send it along. I think a lot of people are really glad we’re providing this service!

PIP: We know if someone is in Madison, they can help by volunteering their time. How can people who live elsewhere help your organization fulfill its mission?

DC: In terms of people further away, buying books from our wish list is definitely a big help [editor’s note: links below]. We’re also always happy to get one-time donations or sustaining donations — whatever people are capable of. It all helps and it all goes directly to the project and just getting books out the door.

Interested in donating a book for the program to send to LGBTQ prisoners? Order from either this wish list, which is from a local bookstore in Madison, or from one of their Amazon wish lists below: