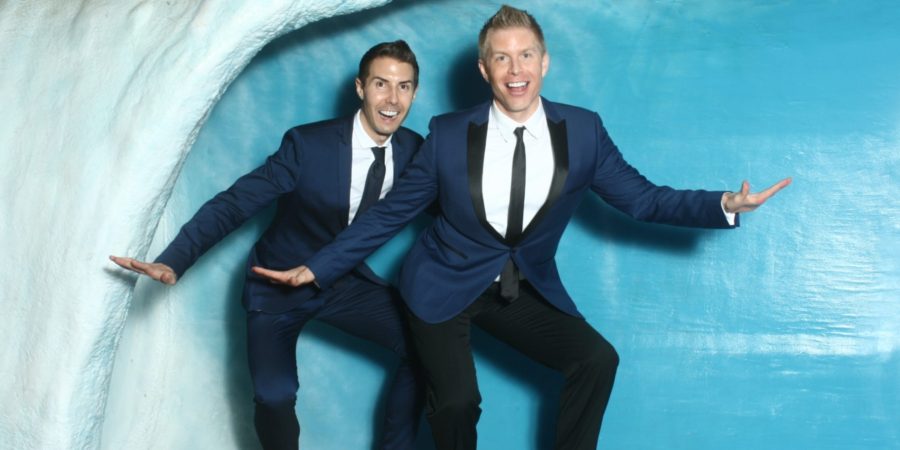 As the child of an NFL player, David Rae (pictured above right) grew up witnessing the perks and pitfalls of wealth. His dad retired when he was a child, so his family valued preserving the money they had, and he was very aware of the need to live within your means. Meanwhile, he watched some of his dad’s colleagues live a luxe lifestyle, only to lose it all.

After coming out as gay and getting involved in the LGBTQ community, Rae then learned how LGBTQ people face unique financial challenges due to legal and institutional discrimination. After dabbling in acting, he decided to make it his life’s work to be a financial advisor, and while he helps clients from all walks of life, he enjoys focusing on serving LGBTQ clients.

Rae, a 39-year-old avid cyclist, lives in Los Angeles with his husband, Ryne Meadors (pictured above left), and their two chihuahuas. Rae previously operated his business, Financial Planner LA, out of another firm, but as of this summer, he now completely runs his own shop so he can focus more on his clients and his work. While based in L.A., he works with clients around the world to help them make better financial decisions. Here’s Rae’s story of coming out and finding his calling, plus some of his best financial advice for LGBTQ clients.

Profiles in Pride: For some background, when did you come out as gay?

David Rae: I came out right after high school. I was starting to come out and find the gay world and meet people, which was when I really came into my own. I think when I really found myself and really took pride in who I was, things really started to go my way. I had more friends, I had more fun, school was better, work went better. Everything was just going better.

It was a difficult process to come out, but compared to what I’ve heard from others…it was a difficult time for me, but it wasn’t like I had a horror story. I wasn’t getting kicked out of my house or anything like that. My family was accepting. I grew up in Southern California, you know, a little more liberal than other parts of the country.

But my dad played in the NFL, so it just wasn’t what they were around or were expecting, for the most part. But I don’t think it was necessarily surprising if you look back at my childhood pictures. I had a lot of friends who were girls!

PIP: At that point, did you live openly as a gay person?

DR: It was kind of like slowly coming out the closet for the first year or two, gradually telling certain people. Then I did a study abroad program in Europe for a year, and that’s when I was like, screw it! I’m across the globe, I don’t really care what anyone thinks at home. I was also in a position to meet a lot more people that were gay and that were my age. That made it more appealing as well.

There are definitely points where I had those thoughts, “Am I only one? Does anyone else feel that way?” Now I think there’s a lot more representation on TV and in the media. And hopefully most people can realize they’re not the only person going through this.

I keep meeting kids who are coming out in like junior high, and I’m like, oh my gosh! And, probably because I’m gay, but I have friends who are parents who are praying their kids are gay. That just wasn’t happening 20, 30 years ago!

PIP: Absolutely. So what was your path to becoming financial planner?

DR: I really was always aware of money. As I mentioned, my dad played in the NFL, and he retired when I was in kindergarten. So we always had a finite amount of money. We had money — we weren’t poor — but it wasn’t going to be coming in like he was a pro football player anymore. So I was very conscious about stretching the dollar and being cost-conscious.

I got to see some people do really well with money and who had a ton of money, and I also saw some fall from grace. They were the big shots; they had the Porsche and had the house on the beach and all the flashes and trappings of wealth, but then all the sudden that was ripped away with a few bad financial decisions, and it was all gone. They probably could have avoided some of them; some, not necessarily.

But I grew up and was taught about money, so I wanted to figure how I could make sure I didn’t end up being rich and then poor. Because it would probably almost be worse than being poor the whole time! If you’ve never had a Porsche, you don’t miss it. But if you’re driving a Porsche around and all the sudden you have to drive a 1982 Ford Pinto, it’s gonna be a little harder to stomach. I don’t see myself ever driving a Porsche, but all the same, I’ve made smart financial decisions in my life, so I can afford a car more fancy than a Pinto.

I studied business and theater in college, so I kind of had my fun with doing theater and I had the business background. I came to L.A. like everyone else and tried to be famous and an actor, and did pretty well; I did some commercials and some theater stuff. But I just went, “This lifestyle isn’t gonna work for me.” I’d met too many people who were on Broadway and were in movies who were still struggling. I wanted to be secure financially. And luckily I got a job, and here we are years later, and life is good. I started as a financial planner in 2003, so I’ve been doing it quite some time.

I really just looked at where I could help people and where I could really learn more about money. And financial planning was really the best place to be social, to be out helping people, and help them make smarter financial decisions. Some of the other parts of industry are a little more sales oriented. Or if you go work on Wall Street as a trader, you spend your whole day staring at computer screens. That sounded really crazy to me. So I was lucky enough to find a company where, when I interviewed, they mentioned they sponsored Pride in L.A. I said, “I want to work for you guys!”

As an adult, it’s one thing to come out to your friends in college and family. It’s another thing in a corporate work environment. At that time, it was a scary thing. So I thought, oh my gosh, I know I wouldn’t get fired the next day for being gay if they’re sponsoring Pride and those types of things.

I also knew, just being a gay man, I wanted to work with the LGBT community. That would be who I knew and who I would be able to help the most. Just because there’s still discrimination out there, unfortunately, and the financial industry is pretty conservative, so I’ve definitely heard some horror stories of advisors not being very nice when their clients told them they’re gay. But it’s good for my business, because they come to me.

PIP: When did you start working for yourself?

DR: I worked for a firm until June, and then I launched my own financial planning firm in June this year. So I now work for myself. Financial Planner LA was mine, it was always my own practice, so they were my clients within the firm. So it wasn’t that I was just an employee somewhere; it was my business with their support.

But with the fiduciary rule coming through, I wanted to be 100% fiduciary all the time and I wanted to be doing that for my clients, and continue to add value and help them more. So I’m doing a lot of media. Now that I own my own firm I have a lot more free go on TV regularly and talk about wide array of financial stuff. So I just have more freedom to really interact with clients and do more for them with my own firm. Helping people make smarter financial decisions is what it is all about.

PIP: What are some of the common issues you see your LGBTQ clients face?

DR: I do think there’s a little bit of a thing, I call it the gay tax. We tend to live in expensive parts of town, we have expensive lifestyles. I know it can be relative, but we have a great opportunity for a lot of us that don’t have kids, that our money goes a lot further. We can still go on trips and still be smart with money, but if you try and keep up with some of your other friends, you can end up in debt quite easily. I think we probably mix more socioeconomically than you might if you’re heterosexual living in the suburbs, where theoretically the kids at your school or the parents around you or your friends are closer to your own socioeconomic status or income level. Not exactly, but closer to it.

I know I have friends who work retail and are probably closer to minimum wage, and I have friends who make multi-million-dollar movies and make millions of dollars a year. I’ll give you an example: sometimes like when we go on trips, someone says, “Let’s stay at the Four Seasons and get suites!” And I’m like, “Uh, I do well, but not that well, nor do I want to spend that kind of money.” While some of my friends are like, “At the Motel 6, can we put four people in two beds and split it?” So don’t be afraid to speak up on those things, maybe find a balance. I know a lot of times there are ways to make kinds of trips more affordable; you can go on a great vacation without busting the bank.

So if you’re in a couple, talk about money! Not just “here’s your bill, here’s the rent.” It’s about life planning together.

Now that a lot of us who are double income are going to be paying a lot of taxes, you want to plan together. I think I’d like my husband to be there when I retire! So I want to make sure both spouses and both parties are saving what they need to be doing, so you can build your financial plan together to make sure you maximize the benefits through your employer and do things to minimize taxes together as well.

PIP: Is there anything else near and dear to your heart that we haven’t talked about yet?

DR: Yes, I do a lot for charity. There’s a bike ride called the AIDS/LifeCycle, I’ve done that like seven times. You ride from San Francisco to L.A. on a bike, it’s like 550 miles, give or take, so that’s fun. My team that I led raised just over $1 million to fight HIV/AIDS, so that’s kind of cool.

PIP: That’s wonderful! If someone is interested in working with you but doesn’t live in L.A., can they still hire you?

DR: Yes, don’t let the blog name fool you — I have clients around the world. People can call me from anywhere, absolutely.

Editor’s note: If you’re in a same-sex couple considering getting married, see David’s financial advice in this NerdWallet article I interviewed him for earlier this year!

Raymond Braun: On Overcoming Shame, Becoming a Gay Media Personality, and Exploring the 'State of Pr...
Christina Wiesmore-Roberts: On Creating Safe Spaces for LGBTQ+ Women in Chicago
Michelle Solorzano Daly and Kelly West: On Creating a Community for LGBTQ Women and a Business Toget...
Daniel Kanter: On Breaking Gay Stereotypes as a Home Renovation Expert
Spread the love