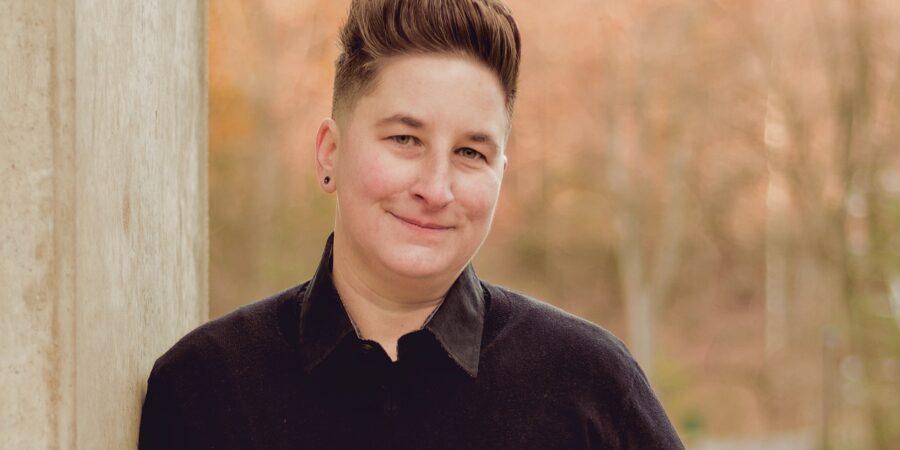 Editor’s note: I conducted this interview with Dr. Jen Manion by phone in April 2020. Soon after, the pandemic began to dominate all our lives, and I ended up putting the blog on hiatus before I published this profile. I’m trying to get back in the saddle, so big thanks to Dr. Manion for their incredible patience!

While on paper, gender identity and sexual orientation are two completely different concepts, they are inherently intertwined. When Dr. Jen Manion first came out as a lesbian, they didn’t view their identity solely about who they loved — they also found freedom to express their gender in new ways. They eventually settled on the identity of “transbutch.”

In college, Manion developed an interest in researching queer history, and they pursued a Ph.D. Manion began teaching social and cultural history courses at the university level, in addition to writing books, and they currently serve as an Associate Professor of History at Amherst College.

Originally, the courses Manion taught about 18th- and 19th-century history included some LGBTQIA material because, well, we’ve always been a part of history. But as they began researching a book on the history of America’s penitentiaries through an intersectional lens, they began to uncover many little-known stories of LGBTQ people from centuries past.

One particular theme continued to surface: anecdotes of “female husbands,” or those assigned female at birth who lived as men, which allowed them to be with (and sometimes legally marry) the woman they loved. Due to changes in cultural norms and language over the centuries, we don’t know how many of these people would identify as nonbinary or transgender today, or how many took on this role just so they could be with their female partner.

But as Manion points out in an essay, it doesn’t really matter why they lived as men — they all transgressed gender and at a time when this was hugely dangerous and brave. They also show how inextricable gender identity and sexual orientation can be.

Manion dug in and published a book last year, Female Husbands, examining this fascinating part of queer and trans history that is so often erased. Manion also now teaches classes specifically focused on the LGBTQ community’s history. In our interview below, Manion discusses why they felt drawn to research and teach LGBTQ history, and how learning from our community’s past can help us today.

Profiles in Pride: Before we dive into your work, what did your journey of coming out look like?

Jen Manion: I came out when I was in college, and it was a great relief to find language and community around my sexuality, and I think at that time, also my gender.

Right now, we often talk about them as two distinct experiences and realms. Certainly for me, coming out into the queer community as a lesbian also fully incorporated an acknowledgment and respect for my gender nonconformity, masculinity, butchness — whatever you want to call it.

I think the queer community historically has always been a space for alternative gender expressions. For me, coming into the queer community, the language we used emphasized sexual orientation more, but absolutely incorporated gender nonconformity.

Certainly as I came into the trans community a decade later, I, like many people, went through a process of trying to figure out if that was me, if I related to that. In some ways, the answer is yes, and in some ways the answer is no.

So I don’t have another coming out, but I think what I did have was a several years’ journey of spending time in the trans community and really thinking about trans language and paradigms and saying, “Oh yeah, OK, this is for me too, this also describes me.”

PIP: When in your career did you start studying LGBTQ history, and why did you pursue it?

JM: I had some really amazing experiences in my history classes in college, and I think one of them was the freedom to write research papers about anything. When I was taking a class in America in the 1960s, I instantly started researching queer activism and queer community from that time.

It’s such amazing information that most of us are really denied access to. I found it both really interesting but also so valuable to give me context for my life and to be reminded that I wasn’t alone. And that so many of the things that I was going through weren’t even new — people had gone through the same experiences for generations.

Also, my introduction to LGBTQ history was very much anchored in an intersectional framework where I was also always learning and thinking about race and class. So my first solo book [Liberty’s Prisoners: Carceral Culture in Early America, published in 2015] isn’t really LGBTQ history at all. But when I was researching my first book, I kept stumbling into references in newspaper articles about people who had crossed gender in some way.

Sometimes they were arrested for it, sometimes they were just these little human interest stories of a few sentences. I just knew there was this tremendous story of gender transgression in the past that we didn’t even know about and weren’t really incorporating into what we think we know about the queer past.

PIP: Around when in your career did you start teaching and focusing on LGBTQ history?

JM: I’ve always taught a course in the history of sexuality for my whole career. I think if you’re a historian in the 18th and 19th century, which I am, you explore same-sex love and intimacies, but also the policing of other forms of love and expression, like interracial sex and interracial relationships.

I’d say in last five years or so, I’ve tried to teach courses that are more exclusively queer or have LGBTQ history in the title.

PIP: What led you to want to write your latest book, Female Husbands: A Trans History?

JM: I think it’s a couple things. There’s the point I just mentioned, where I knew there were these stories in newspapers about people that we didn’t really ever try to systematically collect and understand.

I’d always wanted to write lesbian history. There’s just not enough records to really ever write a thorough history of lesbian life and community in the 18th and 19th century, because that all hinges on evidence of same-sex intimacy, which for women just didn’t exist or didn’t make it into the record.

But I knew there was a huge story about gender that always made it into the record. People who were assigned female and transgender and loved women were always talked about through the language of gender in the newspapers; never through the language of sexual orientation. I knew that I could both get at same-sex relationship between women, which we have not been able to get at in a significant way, and also trans histories.

PIP: Last year my local LGBTQ book club read the play Queen Anne, and our discussion centered on the erasure of queer history. We don’t really know if she was queer; we’re assuming with scant evidence and rumors. I read an excerpt where you talked about the erasure of the queerness of the female wives. Why has there been so much erasure of queer and trans history?

JM: Yes, there’s so much erasure. Some of it is just because sex is intimate, it’s personal, and there’s a strong cultural taboo around writing about it for everyone.

So if you were engaged in some kind of relationship that was deemed illegal or illicit, why would you write about it? Why would you produce a document that would give someone evidence to prosecute you with?

Even for people who did — it’s so amazing we have the records of Anne Lister. She went to such great lengths to both record her desire but also put it in code because the stakes were really high. And the fact that we barely even got them, because family members who might receive or inherit a diary and find out that their ancestor was involved in same-sex love or intimacy would usually burn it and not donate it to the local historical society.

PIP: Do you think the recent popularity of Gentleman Jack about Anne Lister sparked an interest and opened more people’s eyes to the reality of queer love in centuries past?

JM: Yeah, I love it, it’s so exciting! I think the portrayal of Gentleman Jack is just wonderful. There’s also an Apple TV+ show called Dickinson about Emily Dickinson. Emily Dickinson is always portrayed as such a lonely, sad person, and this show just brings her to life in a way that I don’t feel like anyone has done before, where you can really see her just being so smart and bold and assertive and full of life.

I feel like that’s how Gentlemen Jack is portrayed. I actually feel that pop culture is so important in making up for the gaps in the historic records that kind of leave us wondering and thinking. Maybe it wasn’t possible to be queer, or if it was, it was as sad lonely life. But they’re filing in the gaps and giving us another way of understanding what was possible, and it’s so exciting.

PIP: We also read Confessions of the Fox by Jordy Rosenberg in our LGBTQ book club.  While it’s historical fiction, it was a powerful representation of what life must have been like for a transgender person and queer couple back then.

JM: Yes, that book was so well-done, it’s really amazing. I can’t believe the press let him publish the footnotes. It was very serious work of scholarship too, it was brilliant.

PIP: It really was. In closing, what do you think today’s queer community can learn from this history and what you’re discovering about our past?

JM: There’s so much. I think that even for people who find a great community, there’s still an inherent loneliness, especially because many of us spent at least a chunk of our youth coming to terms with our sexuality or gender identity and often not being supported by people around us.

I just love that people have access to so many stories and such a rich history of other people having gone through the same thing.

I also think, especially for trans people and trans communities, it’s really powerful to be able to show this isn’t new, this isn’t a fad, we didn’t just make this up yesterday. People had been transing gender forever, and even in some cases long ago, people were understanding and supportive and respectful of that path.

I think we can learn from our mistakes. Society doesn’t have to just continue to condone second-class status, homophobia, or transphobia. We can look at our history and choose to have different values and to embrace people.

PIP: Definitely — whenever I read our community’s history and realize how much harder life was for them, I feel overwhelmingly grateful for what I have now.

JM: Yeah, absolutely! We’re part of this tremendous social movement, generations of people who have fought. I think the hard part is some things seem the same, but some things are also different.

Ainsley Blattel: On Being a Queer, Nonbinary Wedding Planner for the LGBTQ Community
Fiona Dawson: On Advocating for the Bisexual and Trans Military Communities
Zane Alvarez: On Coming Out As a Transgender Man in the Army
Janae Marie Kroc: On Being a World-Class Transgender Athlete in the Spotlight
Spread the love