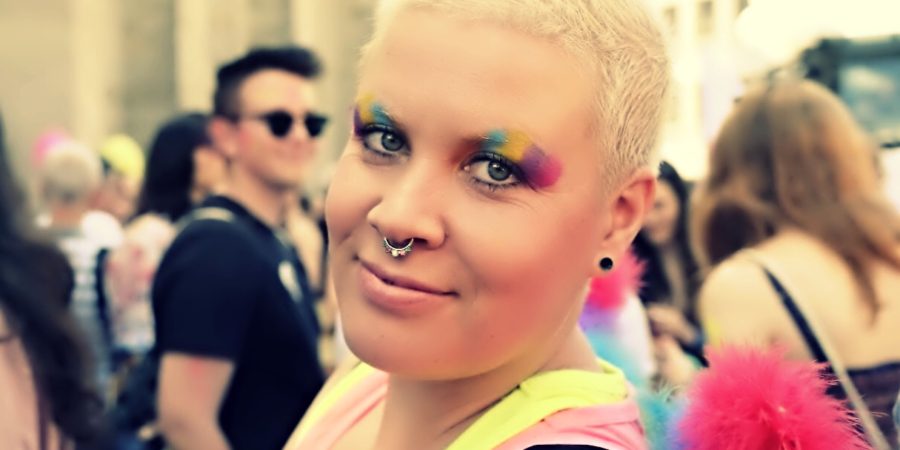 Growing up, Otti Krogerus hated their body but didn’t understand why. They were assigned female at birth, and while they didn’t feel like that identity fit, they didn’t fully identify as a boy, either. Krogerus was born in Finland in 1979, a time when there were scant resources on gender identity and zero talk of gender nonconformity.

Not only did Krogerus hate the female attributes of their body, but when they were a young teenager, they developed endometriosis and adenomyosis — two health conditions occurring in female-bodied people that cause chronic pain and horribly painful periods.

Over time, Krogerus learned about the concept of being gender non-conforming, also called nonbinary, and realized that’s exactly what and who they were. Then, as a social worker focused on the LGBTQ community, they met others like them.

Krogerus decided to have a double-mastectomy, which made them feel much more comfortable in their own skin. They also had a hysterectomy as a last-ditch effort to help with debilitating endometriosis pain. Fortunately, this extreme measure ended their chronic pain and helped them feel that their body was even more aligned with their identity.

While the 38-year-old is currently staying in their home country of Finland working in IT customer support, they are a minimalist who has a passion for travel. They move often, and have spent a lot of time in Asia, where they feel the most comfortable and accepted as themself. They also keep a blog about their life, Otti Wanderlust.

This is Krogerus’s story of realizing they were gender nonconforming, taking steps to align their body with their soul, and finding a place where they belong.

Profiles in Pride: When did you first figure out that you were a nonbinary person?

Otti Krogerus: That took me a bit of time actually, because for part of my childhood, I grew up in Ethiopia. It’s a very paternal country, and males are dominant. I had my puberty there and I absolutely hated my body when I was 9 or 10. I wasn’t really happy with my body, especially my growing breasts — I totally hated them. I think that was the worst part, and I had very painful periods too, and that turned out to be endometriosis.

In society back then, in the ‘80s and ‘90s, there was no information about anything regarding gender issues either, so basically I just accepted myself as a girl, but I always called myself a tomboy or a boy’s girl. I kind of blended in for a while and started questioning things a bit later, but I never liked being called a woman, and I told people around me that I prefer not to be called that. When I really started embracing it was in my late twenties. That’s when I had the vocabulary and I understood what I am and how I am, and I’ve gone from there. 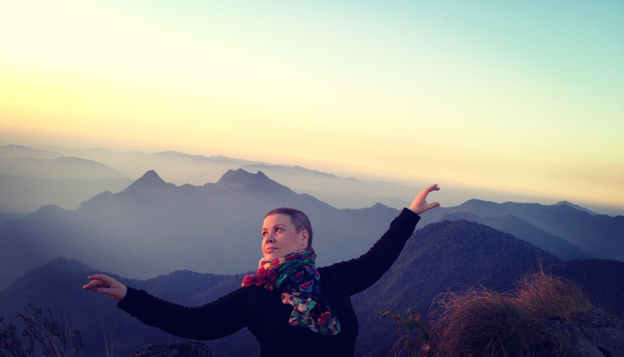 PIP: When did you start realizing there was a word for it and there were other people like you?

OK: I think maybe 2005 or so, I started seeing more information on the Internet. Because of my background in social work, I worked in an LGBTQ organization in Finland for three years. I was there from around 2009 until 2011 or 2012, so then I met a lot of people like me. I was familiar with the issues before, but then I really got into the world.

PIP: What was the coming out process like for you?

OK: It’s funny because back then, I was married. I was perceived as a woman, and my spouse was a man. We looked like a straight couple, so I never had to come out until I got divorced. I was happy with myself and I was saving up to remove my breasts. People around me knew about it, but when I divorced around four years ago, everybody was pushing me into these boxes.

People were really putting me into these boxes, like, “Hey, you’re a girl and you’re going to find a nice boyfriend.” I just had to tell everyone, “I’m not a girl; I don’t want to find a boyfriend.” I’m pansexual, so I don’t really look into the gender. I go for souls and good personalities.

Then I started from there, and I’ve been really public about my identity in my Instagram. I’ve blogged about it too, because I noticed that a lot of people are hiding. 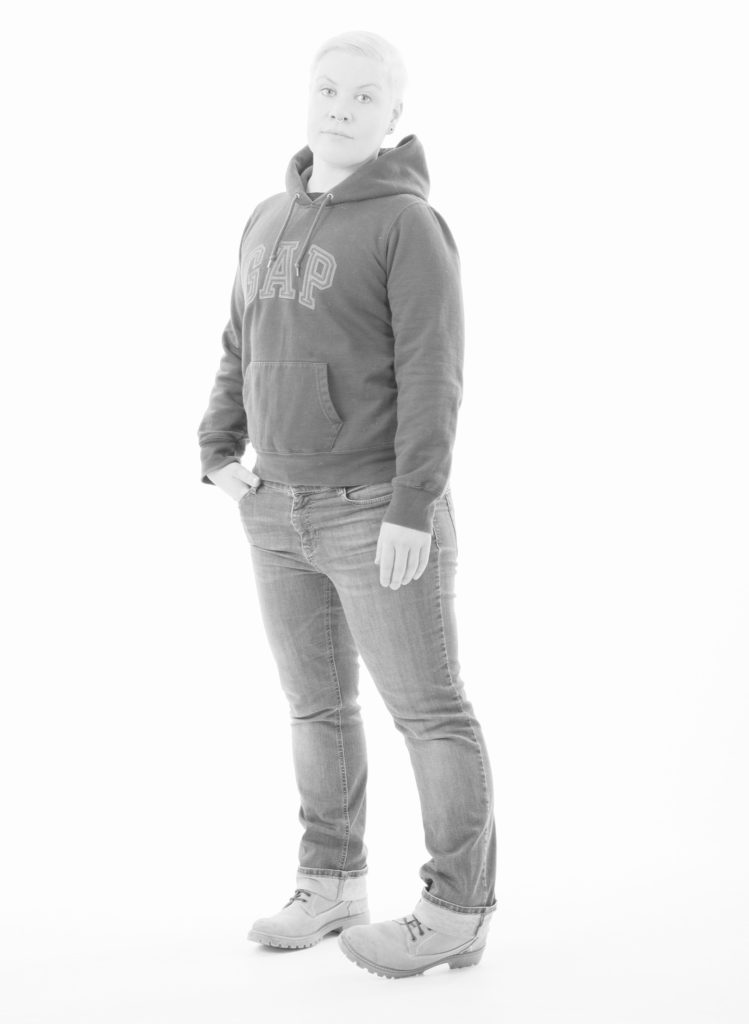 PIP: Being nonbinary or gender fluid means different things to different people; what does it look like for you?

OK: Everybody is different and unique. How I identify is, I usually say, “I’m not a man, I’m not a woman. I’m just me.” That’s basically me in a nutshell, because I am how I am. I do enjoy an androgynous look and I enjoy when people don’t know what I am or who I am. I enjoy it if I’m sometimes called “sir” or “boy,” but I don’t prefer to be called a woman.

Sometimes I play around with makeup; I don’t despise it, but in the past few years, I don’t really wear feminine clothes at all, so it’s more in-between and androgynous. I also have a more male body, or I’ve worked towards it; I had a mastectomy one and half years ago.

PIP: Did you often encounter people who struggle to understand your identity?

OK: Sometimes. I think the thing is, I’ve been working to have a really good network of people. I have a lot of friends who are LGBTIQ, so they’re very understanding and supportive. There are times when I have to explain myself, but I’m happy with it, because I love to spread awareness. For the past four years I was living in Thailand, and I feel that I fit in well there. Most people there are very accepting, and there’s a very strong LGBT culture. I do blend in more there than in Europe.

PIP: With your travels, have you faced any difficulties with your identity, or have most places you’ve gone been accepting?

OK: There are places that are very accepting. I’ve found that when I’m happy with myself — and I wouldn’t say self-confident, but I feel good about myself — then people around me accept me too. I’ve found the effect when I’m stronger and I’ve worked on my identity, and am strong in who I am, then I have more acceptance around me. Not in a bad way, but in a good way.

PIP: Has being nonbinary made it even more difficult to deal with having endometriosis?

OK: It totally was, but I had to just find ways to get better. I never liked periods; I always hated those too. They happened to be very painful, and I had a very bad case of endometriosis and adenomyosis on top of it. It was a challenge. And of course, the doctors always say, “You’re a woman.”

I was asking for a hysterectomy, mainly for me to find a way to have a better life without pain, but it’s not a cure, and it doesn’t work for everyone, but it did for me. Back when I was in Finland, they basically denied me because they told me I was a woman, and women need to have children. I got that feedback a lot. Then I went to Thailand and they said, “That’s you, and we’ll go with it.”

I had my hysterectomy in Thailand about four years ago. It really helped with endometriosis; I’ve had a completely pain-free life since then. It’s usually not the way to go, but I really followed my intuition and listened to my body. Of course it does fit with my identity too, so I got a double effect. My first reason for it was to get a more pain-free life and a bit better quality of life, but of course I love not having periods and PMS and all that. And it does resonate with my identity, too.

PIP: Tell us a little about your blog, Otti Wanderlust.

OK: I’ve had a blog before, but when I had my surgeries, I wanted to keep quiet and just recharge and get better and recover. Because sometimes when I blog, I’ll talk about things like identity and gender and sexuality. Usually you get some feedback, positive and negative. While I was recovering, I wasn’t ready for the negative feedback. But now I’m back at it again.

Why do I blog? People ask me to write. People were asking me to share my ideas about things. I live in a bit of a different way. I’m not in a nine-to-five work system. All of my belongings fit in a backpack. I don’t have any possessions, I don’t have loans, I don’t have kids. I’ve been downsizing for the past five years. I changed countries, living mostly in Asia. A lot of people are interested in that, so I write about that too — how to minimize your life and have a different quality of life.

They’re also interested to hear about my gender identity and how I did things. I haven’t met one psychologist during my process, and people are very interested in that, because now they’re talking in Europe about not going through this long medical process to transform, but to just go to a person and say, “This is me.” They should be able to modify their body or anything if they want to.

I have friends who identify like me, and they have huge problems with the medical system in Europe, because the transitioning process is really only made for if you identify as transgender. But if you’re nonbinary and you just want to cohabit one way or another, it’s still not there. I just didn’t have time or patience for it. I would have had to stay in Finland and then let doctors define me.

I’ve had a lot of people asking me now about how I’ve done my process and how it’s possible for others too. I know a lot of doctors would speak against me, but I do think I’m the only one who knows who I am and how I feel. Of course I’ve seen doctors in Thailand and they see I am what I am, but still it’s not a lengthy process of spending a year seeing psychiatrists.

My name is totally gender fluid, too. I chose it for myself. In Finland, it’s a 50/50 a male and female name. I found it when I was a teenager, but now it’s officially mine, so it was easy to change because it exists in both genders.

Lee Dewey: On Fighting to Be Visible as a Gender Non-Conforming Person
Photo Essay: Highlights from Capital Pride in Washington, DC
Kelly Marshall: On Creating a Safe Wellness Space for the LGBTQ+ Community
Dr. Jen Manion: On Uncovering Trans History from Centuries Past
Spread the love